A Lunar New Year has started in China with celebrations for the Spring Festival across the region in other Asian countries: this is the season when Chinese people gather together, celebrate family reunion, wrapping up what has passed and preparing for a brand new year. It is also the ‘biggest’ occasion for Chinese during a calendar year, as Spring Festival brings with itself the ideas of ‘joy’ and ‘hope’.

In their recent omnibus wave, our members in China, WisdomAsia, decided to concentrate their attention on a focus other than usual: instead of capturing how Chinese consumers celebrate the upcoming Spring Festival, they took a slight different approach by asking what their consumers worry about during this ‘happy moment’.

It seems nearly everyone will feel restless about at least one thing for Spring Festival, especially for those who are younger. For those above 40, though there are still things to worry about, they have shown stronger resilience with their growing wisdom. 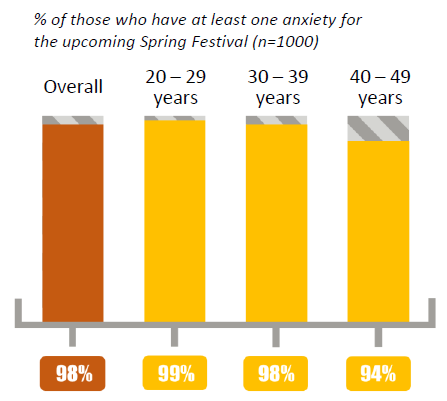 But what troubles them most? Seems the top 3 anxieties are closely associated with the main activity for Spring Festival – gatherings:

If we look across age groups again, ‘gossiping’ troubles the youngest consumers the most. While for the older age groups, with their extended family and widened network, ‘endless gatherings’ and ‘giving red packets’ are viewed as heavier burdens.

Apart from the above mentioned anxieties, ‘gaining weight’ (26%) is also a headache for many consumers – especially for young females with higher earnings, as they tend to place great emphasis on their appearance.

WisdomAsia, together with all the colleagues in WIN would like to take this opportunity wishing everyone good health and prosperity for the New Year!