According to the recent results of 2017 End of Year Survey collected by Instituto DYM, the percentage of Spaniards who believe that the economic situation will get worse in 2018 reaches 38%, two points above those who thought the same three years ago, while 39% believe that it will not change. In 2015 and 2016, the number of pessimists about the future of the economy was respectively 29% and 37%, therefore there is a clear downward trend in economic optimism. In fact, the difference between optimists and pessimists is 19 points in favor of the latter, when last year was only 10 points.

The employment situation is one of the variables that most determine the results of the survey. Thus, part-time workers are those who predict worse economic prospects (-30), followed by retirees (-28) and unemployed (-22). On the contrary, full-time workers are the most optimistic (-12), followed by students (-14). Contrary to what might be thought by the economic situation of the respondent, those with high incomes are even more pessimistic than those who are in the low section, with a negative net of -27 for the first and -23 for the seconds. 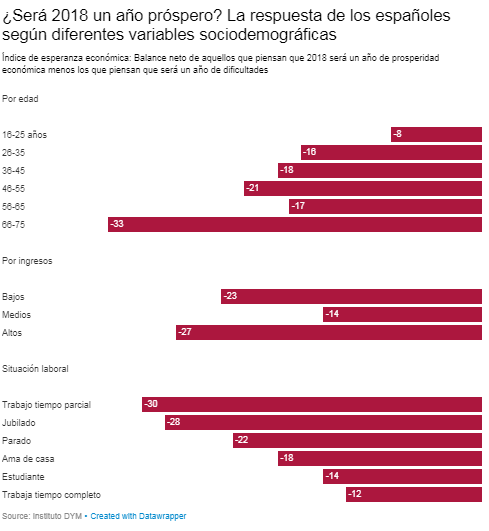 Concerning the perception of happiness, both Spain and the average of the countries of Western Europe present levels similar to each other and practically without variations with respect to the past year. The percentage of population that declares to be happy reaches 57%, for a 10% that feels unhappy, while the remaining percentage, that represents a third of the Spaniards, responds “neither happy nor unhappy”.

Read the full article from “El Confidencial” at this link (Spanish version).